How is Air bubble film made with extrusion machine?

Do you know how bubbles are made on bubble membranes? Maybe a lot of people have that question all the time. Now let's take a look at a lot of people like to pinch by hand bubble film is how to use the epe foam extrusion machine to do.

Choose different kinds of resin raw materials according to the soft and hard requirements of the air bubble film, the raw material particles are inhaled into the mixer, and different kinds of raw materials are mixed evenly in a certain proportion, and then the mixed raw materials are sent to the next process through the pipeline. The raw material is put into the machine of the extruder, and the melted raw material particles are heated at 230 degrees Celsius. The melted resin is sent to the film forming and blowing machine. Through the machine extrusion and expansion of the film made of resin, by pulling inward at the exit of the film and injecting air, air bubble film machine will make the film into a cylindrical film, and through the injection of air can make the film thickness more uniform. The cylindrical film is then cut in two with a knife and placed on a spool. The two layers are made of a double film made by a pressure roller, which is softened by heating the film and then slowly wound over a vacuum forming roller with a round hole, where one layer is sucked up into a vacuum bubble. These rollers have holes in the round holes and are connected to a epe machine to extract air, and the vacuum rollers suck out the numerous bubbles in the film. These air cushion film machines produce bubble film that can be cut and bundled for packaging, and it has long been thought that the foam was caused by inflating.

As a buffer packaging material, how strong is the compression energy of air bubble film? We usually pinch the bubble film by hand, can not feel how strong. But someone put a stack of bubble wrap under the hydraulic press, and it was quickly crushed. The sound of bubbles bursting can be heard throughout the roll. The pressure gauge on the side showed that the pressure reached more than 70,000 kg, but when the press rose, the compressed bubble film began to expand, as if the press had no effect on it. 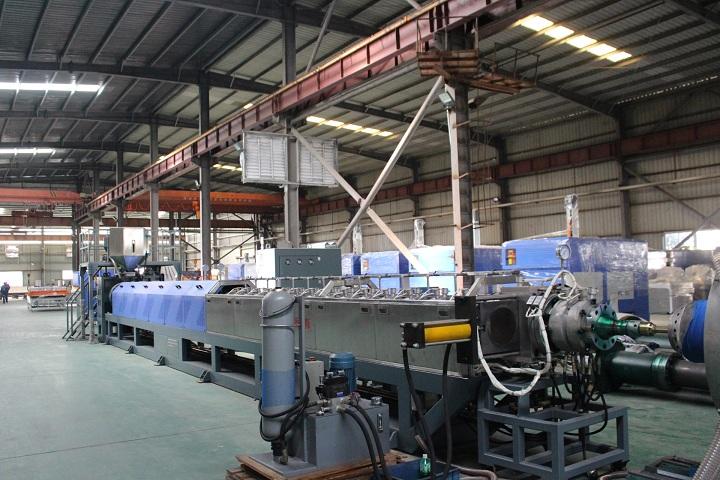 1. Extruder is composed of motor, reducer, screw, barrel, net changer, mold and heater. It is mainly responsible for the melting, filtration and extrusion of raw materials.

2. Forming machine is composed of forming roller and vacuum pump. The forming roller has 3 kinds of specifications (6mm, 10mm, 28mm), can be equipped according to customer needs. The molding machine is mainly responsible for the effective molding of the molten material extruded from the mold. It is very important to make it into air cushion film products.

5. The tractor is composed of traction roller, cutting device and film guide roller. It is mainly responsible for effective traction of air cushion film from the forming roller.

Hello, please leave your name and email here before chat online so that we won't miss your message and contact you smoothly.